KELLEY BLUE BOOK – Inventory-constrained Toyota held on to the top spot for shopping consideration, but Ford narrowed the gap in the second quarter despite its own supply challenges, according to the Q2 2021 Kelley Blue Book Brand Watch™ report for non-luxury brands.

The Kelley Blue Book Brand Watch report is a consumer perception survey that also weaves in consumer shopping behavior to determine how a brand or model stacks up with its segment competitors on a dozen factors key to a consumers’ buying decision. Kelley Blue Book produces a separate Brand Watch report for non-luxury and luxury brands each quarter.

Toyota maintained its position as the most-shopped brand, and shopping translated into sales as Toyota sales rose 74% in the quarter, far outpacing the industry’s 50% gain, causing its market share to edge higher. Toyota, with Lexus, sold more vehicles in the quarter than General Motors for the first time.

The second quarter saw a 62% rise in industry sales of traditional cars, and the Camry rode the wave. Its shopping consideration rose 18%, putting it back on the list of Top 10 most-shopped models for the first time since last year.

Ford was one of the few brands that had higher shopping consideration in the second quarter than in the first, despite production cuts and inventory shortages. It narrowed the gap with Toyota. Of non-luxury shoppers, 31% considered a Ford, up from 29%.

Chevrolet, also hampered by production cuts due to the chip shortage, saw its shopping consideration rise to 27% of all non-luxury shoppers, up from 25%. Shopping consideration for the Chevrolet Silverado pickup was up 28% from the earlier quarter, the biggest gain of any model in the industry.

Subaru suffered the biggest loss in shopping consideration of any brand, possibly due to its extremely tight inventories caused by the chip shortage. Its consideration fell to 13% of all shoppers, a drop of three percentage points. Subaru’s most popular models, the Outback and Forester, fell the most among the Top 10 most-shopped models, and those models had the skimpiest inventories throughout the quarter. Forester’s shopping consideration declined 26%; Outback was down 22%. Impreza also fell but to a lesser degree.

Shopping consideration for pickup trucks took a breather in the first quarter from previous frenzied levels, and, subsequently, pickup sales declined in the second quarter with June being their lowest month all year.

But shopping for trucks picked up steam in the second quarter. Of all non-luxury shoppers, 31% considered a truck. That was up from 29% in the first quarter and down from 35% in the year-ago second quarter when automakers offered zero-percent financing for up to 84 months on trucks. 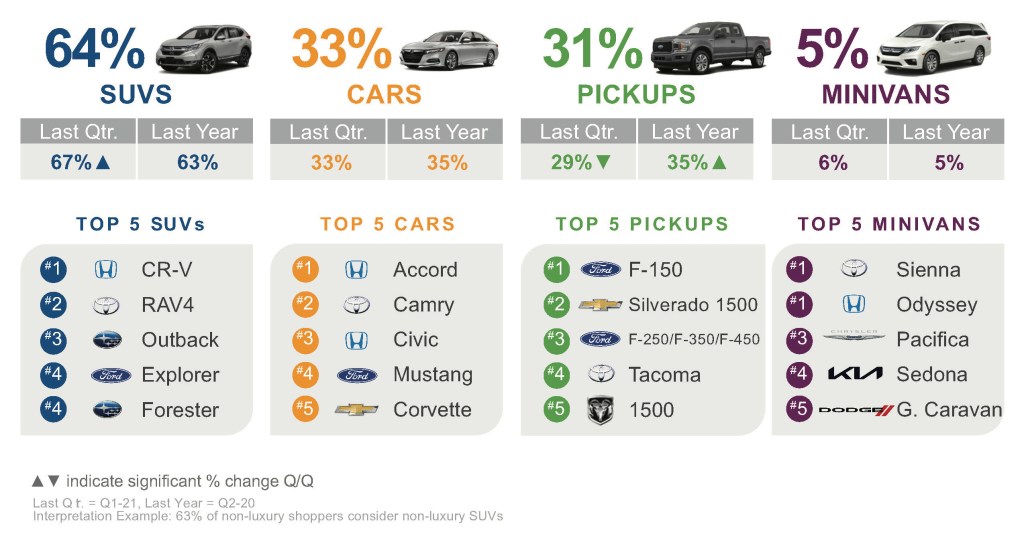 Pickup trucks dominated the first and second spots with Ford F-150 leading for 6 quarters in a row and Chevrolet Silverado’s rapid climb in consideration to the No. 2 spot. The larger F-Series models, Toyota Tacoma and Ram 1500 rounded out the Top 5 list of most-shopped trucks in the quarter.

The return of interest in trucks may be due to construction and housing starts being strong and Americans doing home projects. Some people also may have considered pickups as an alternative to SUVs.

Most of the softening in the SUV category came from weaker shopping consideration for compact and midsize SUVs, both of which had extremely low supply. Sales volume leaders Honda CR-V and Toyota RAV4 had significantly lower shopping consideration as did the Subaru Outback and Forester though they all remained on the list of Top 5 most-shopped SUVs along with the Ford Explorer. The Toyota Highlander fell off that list in the quarter.

Undoubtedly, SUV consideration will regain momentum as a number of new models hit the market. Jeep launches the new Wagoneer and Grand Wagoneer along with a redesigned Grand Cherokee and a new Grand Cherokee L, with three-row seating. Also new this fall are the Mazda CX-50 and the Alabama-built Toyota Corolla Cross.

Shopping consideration for traditional cars held steady at 33% of all non-luxury shoppers. Used vehicle shoppers found empty lots and some chose to buy a new car instead of a used vehicle. SUV shoppers likely looked to cars as alternatives to SUVs in skimpy supply. The Toyota Camry, as well as the Honda Accord and new Civic, increased shopping consideration. The Ford Mustang and Chevrolet Corvette rounded out the list of Top 5 most-shopped cars, as sports cars often do week in the spring as consumers dream of summer driving fun.

The minivan segment held steady at 5% of all shoppers. Minivans had the lowest inventories of any segment through much of the second quarter. The hybrid-only Toyota Sienna – the most-shopped minivan – and No. 2 Honda Odyssey also had a low supply. Rounding out the rest of the most-shopped minivan list were the Chrysler Pacifica, which was not produced for much of the quarter due to the plant being closed for lack of computer chips, the discontinued Dodge Grand Caravan in sell-down mode and the Kia Sedona in its final days as it is replaced by the Carnival.

The list of Top 10 most-shopped non-luxury vehicles represented a good mix of trucks, SUVs and sedans – domestics and imports. Ford and Toyota led with three models each on the Top 10 list. Ford had the F-150, larger F-Series trucks and the Explorer. Toyota had the RAV4, Tacoma and Camry.

Honda and Subaru each had two models on the list – Honda CR-V and Accord and Subaru Outback and Forester. Chevrolet had one.

Ford F-150 and Chevrolet Silverado were the first and second most-shopped vehicles.

For the second consecutive quarter, Ram captured the most top honors in the 12 factors most important to non-luxury vehicle buyers. Ram was No. 1 for Driving Performance, Interior Layout, Technology, Exterior Styling and Ruggedness. The brand took second place for Driving Comfort and Prestige/Sophistication. 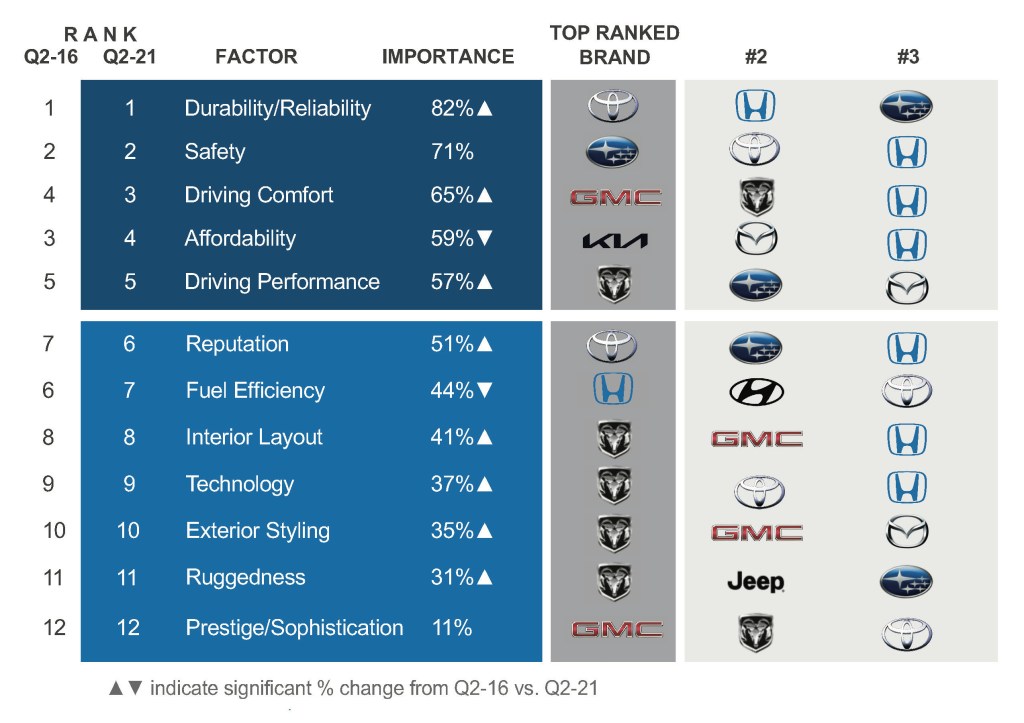 Ram tends to score well when the entire pickup truck segment is strong in shopping consideration and sales. In addition, Stellantis, the company created earlier this year by the merger of Fiat Chrysler (the parent of Ram) and PSA (Peugeot) Group, unveiled the Ram 1500 TRX, which can be transformed into a three-row SUV with performance, style and versatility. Ram has long been applauded for its infotainment system, which recently was upgraded, elevating its technology image.

In general, the rankings of factors most important to non-luxury shoppers have remained mostly in the same order the past five years. Despite recently rising gas prices, Affordability and Fuel Efficiency have become less important while all other factors (aside from Safety and Prestige/Sophistication) have become more important.

No one can touch Toyota on the all-important Durability/Reliability, a spot it has owned for years, and Reputation.

Subaru continued to dominate Safety. Honda, which placed in the most categories – eight of 12 – took first in one, that being Fuel Efficiency, which it has long dominated.