General Motors announced today that it intends to drawdown approximately $16.0 billion from its revolving credit facilities. 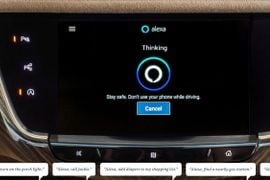 General Motors is bringing Chevrolet, Buick, GMC and Cadillac owners the ability to add convenience and productivity to their daily drives through a new in-vehicle Alexa experience coming in the first half of 2020.

Kelley Blue Book analysts say the average new vehicle transaction climbed to $38,259 in October, a slight decline from the prior month but 2.9% higher than a year ago.

July deliveries increased 1.3% in the first monthly U.S. new-vehicle sales report to include none of the Detroit 3 automakers, but the seasonally adjusted annualized rate fell below 17 million for the fourth time this year.

Detroit Three, UAW Will Square Off Over Wages, U.S. Jobs